« The incredible adventure of King Emir »

Testimonials and intention of the show

Is it a clown or theater or storytelling show?

I would say it’s a clown show, based on a theatrical canvas. First we have

wrote the story, and then as time went on, the clown was highlighted.

Little by little accidents happen in the life of the king and they are brought to light to create more connection between this king and the public. The king will gradually accept himself with his faults, his fears and his clumsiness and, who knows, perhaps the public goes the same way…

It is also the tale of King Emir who goes in search of his people. 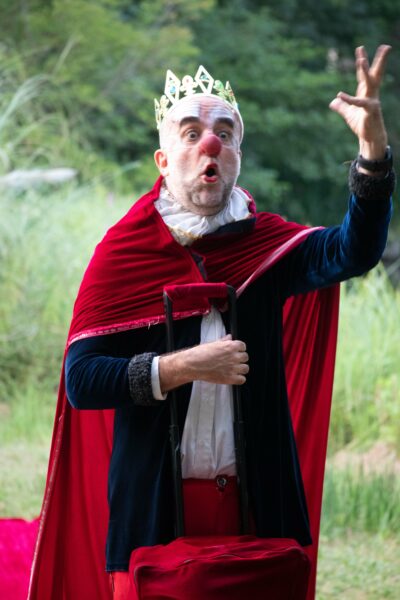 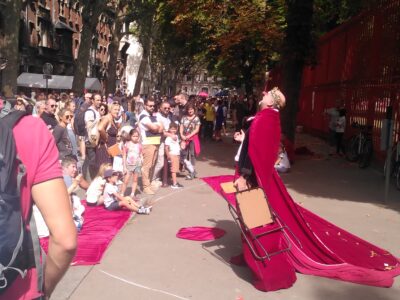 Is this an all-public show?

It is a show that has several levels of reading and speaks to different ages from 4 years old. Indeed children quickly make history and, at the same time, adults are also taken by history and emotion .

The show is always in a foreign language, in Dutch, because it is not necessary to understand the language. It is used as a means of transmitting messages and it is thanks to the body and emotions that it becomes understandable. At the same time it intrigues. If the show is performed in the Netherlands or Flanders, the show will be in French, because it is through body and emotion that the message is delivered.

What are the themes of the show?

I’ve always had an ambivalent relationship with loneliness. On the one hand, I like to be alone, because I feel quiet and safe, and on the other hand there is always this desire to meet the other.

The clown-performer and King Emir, both are in search of encounter and connection.

The king seeks his people to find himself among other beings, because as a king, we often find ourselves alone. The king protects himself behind his status, and has trouble sharing his vulnerability and living a relationship where his humanity meets the other. Beyond that, the king establishes his power, dominates. But who wants to live a relationship of domination or authority? 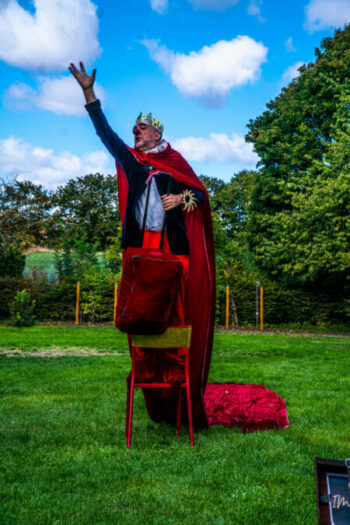 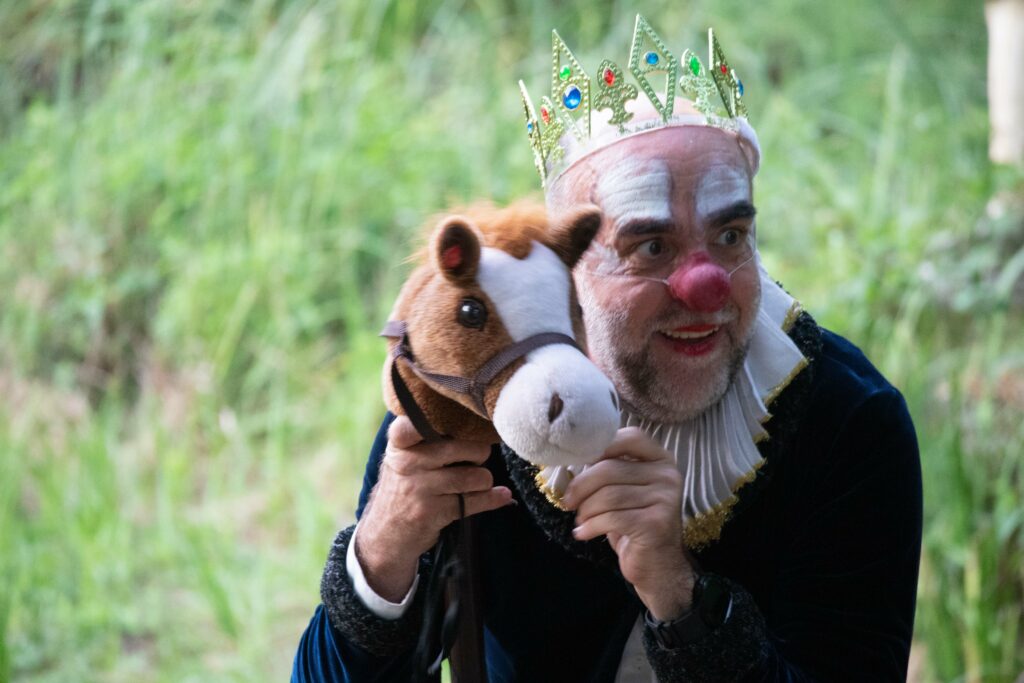 What is the strength of the show?

Apart from the two themes, the highlights of the « one clown performance » show are the interactivity and barrier-free language. The clown needs to live to exchange with his audience because he wants to be accompanied by him, even to be loved by him, even more because the king seeks the encounter to make up for his loneliness.

How to create interaction has always questioned me, it is even vital in the encounter with others.

Here Emir addresses the public as well as his people, he mobilizes them, requisitions them, interrogates them, coaxes them.

The public is invited to participate directly in its history and to be a determining factor. Indeed Emir will end up downloading the attributes of power, to finally build more balanced and horizontal relationships with his «like».

Why a clown show ?

Passionate about clowning for almost 25 years, the clown allows us to be who we are, to talk about important subjects in a comic, playful and at the same time with depth.

The clown shares more directly his emotional states and is even appreciated for it. He likes to rub shoulders with others, at their limits and dreams of contributing to who he is.

He tells his story with poetry by inventing touching, funny, even dictatorial characters. He questions himself, his own behaviors and questions us at the service of encounter… 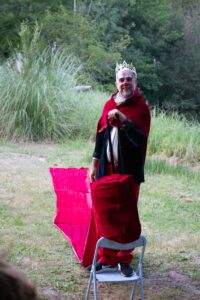 I left the profession of professional actor in 2008 and continued my career as a trainer. I always hoped I could return to my passion for gambling. I continued the clown with the hope that one day I could put on a show and perform.

In April 2022, the public presentation of a “Royal Trombine” clown number was the impetus I was waiting for. This comic sketch featuring a king who imagines himself a photographer received a warm welcome from the public. He decided to launch me into the creation of a show that could talk about questions that have continued me throughout my life: the relationship to power and loneliness.

The meeting with Cécile Rist, director, was decisive. She dreamed of directing a clown; I dreamed of finding the person who could support me in the realization of my project.

We, Istvan and I Cecile, have sought to offer a mobile and autonomous form, easy to play anywhere, a form that is suitable for both adults and children. A form of exterior, seemed to us the freest, like the boatmen and troubadours of old. The appearance of a clown in the public space, is today unexpected. As this one is a king who seeks his people, this corresponds perfectly to that of an actor who seeks his audience. The basis of the proposal is laid down.

Istvan then provided me with a lot of objects and notions with which he wanted to play, that is, Istvan’s intimate themes: solitude and power. We began to embroider a story, a journey, that allowed us to include them while telling a coherent story. The clown happens to be one of our most precious and mysterious intimate arts. While respecting this narrative coherence, we also leave the clown a space of freedom to let himself bounce, resonate, improvise and react to the unpredictable of immediacy.

The show is a photo studio hosted by the clown Emir . It exists independently and can also be added to the main show.

Inventing himself as a photographer, Emir invites the spectator to come and have his photo taken with or without the king’s character.

Each spectator, group of spectators, family, group of friends is photographed by our dear King Emir.

The worry is that Emir does not really know how to use a camera, nor a tripod! The consequences are disastrous. The spectators will have to manage to put themselves in the angle of view of the lens.

Fortunately, the spectators are happy to do so, and have fun for the greatest satisfaction of Emir and will finally leave with their photo.

Duration of the animation: 10-15 minutes + playful time of photos with the spectators up to 90 minutes 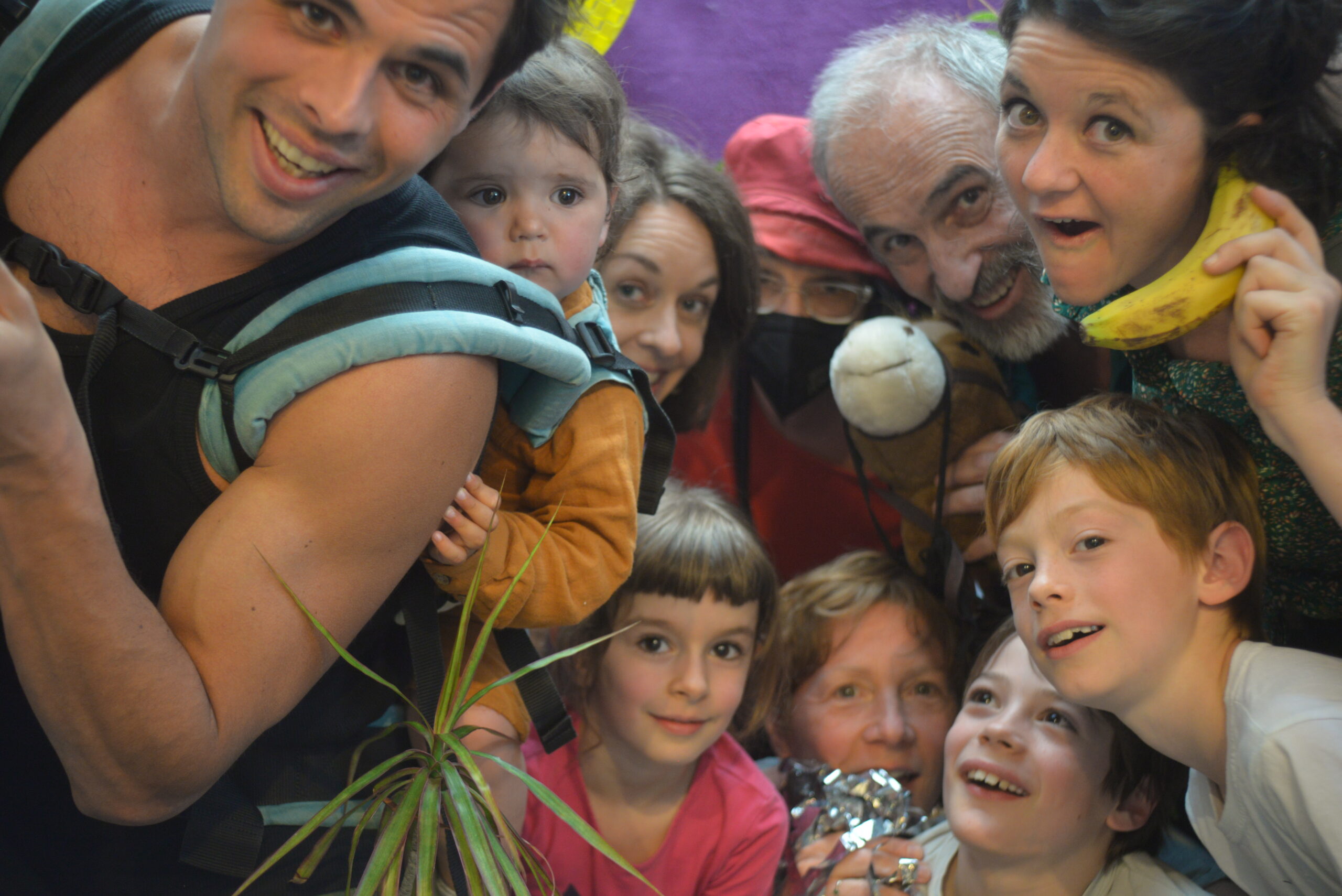 Do you have an educational or artistic project?

Beyond the show, we have indeed created a young audience version including an educational and artistic project because the themes of loneliness and especially of the relationship to power interest both young people and adults. On the one hand, we offer arts education and cultural activities in schools, cultural centres, theatres or festivals around our main themes and for the youngest: creating interaction, daring to express and share emotions

I also propose for the whole public an initiation or deepening of his clown in order to discover or increase the pleasure of being clown and live the encounter with oneself and with the other.

CECILE RIST is a director, an author.

In 2003 she founded the BordCadre company, of which she quickly became the director and author. Since 2017 she has ventured on the side of the circus with « Il y aune fille dans mon arbre » by Natalie Rafal, a show combining auteur theatre and aerial fabric. She is working on the creation of her new text: L’Hélipce for which she has already obtained an exploratory residence on the Théâtre du Nord’s grand plateau, and a writing residence at the Chartreuse (Centre des écritures dramatiques contemporaines). Cécile Rist’s work plays with the codes of burlesque, with Emir, it’s her first real collaboration with a clown! And it makes sparks!!! 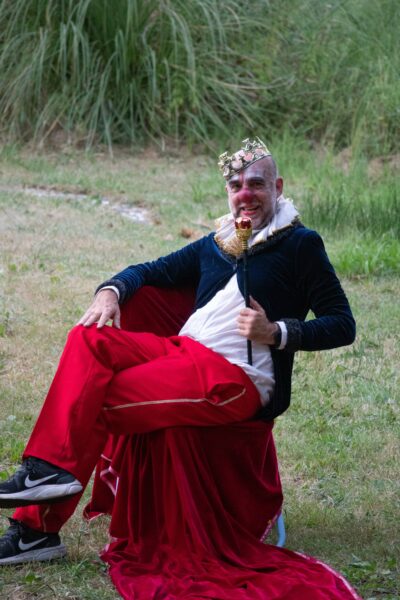 ISTVAN VAN HEUVERZWYN is an actor and clown. He started his theatrical studies in 1994. During an internship led by Ami Hattab, the character of Emir, his clown is born. In 1996, he became a professional actor until 2008 then he devoted 12 years to personal development and teaching, especially clown. In 2020, he resumed classes with Fred Robbe and revived his character of King Emir.

He puts on some clown numbers like: El number, clown show -tango, A fashion show, The king. He is also André Riot-Sarcey’s assistant for Les 7 clowns sur un fil. He creates plays such as The Way of Tea, an initiatory tale that has been performed in France and India. Besides, he’s been teaching clown for about 20 years.

It is a company of theater, clown and professional development directed by Istvan and which has also produced several shows and many stages of theater clown and improvisation in France and abroad.